I needed a lightweight,  impact resistant, streamlined fairing for a flying robot.    I could 3d print a part with the right shape,  but 3d printed materials would either be  too weak,  or too heavy.   I’ve been considering a hybrid workflow which this was the perfect opportunity to try out:     3d printing a mold for composite layup.

It worked wonderfully!   The mold printed overnight,    and after some sanding primer was applied and sanded down to a 600 grit finish,  I waxed the mold,  and it was ready to invest with fabric.   I vacuum bagged the parts  for good consolidation,  and am very pleased with the results,  shown above.

I was issued US Patent number 10,710,247 on July 14th 2020 for a new type of robotic gripper device uniquely able to grasp difficult-to-grasp food items.

Robotic preparation of food is hard, in part, because of the difficulty of grasping and manipulating  irregular shaped,  slippery, and loose aggregated cooking ingredients like chopped onions, shrimp, or loose lettuce.    I was asked to consider if any new design could meet the needs of this task, and prototype it.      From my previous work with mechanical iris development inspired by the international space station’s Canadarm gripper,  (see: CNC Bubble Iris), I realized that  a novel 3-degree-of-freedom gripper could meet this need:  a conical cage of slender spears, which could change shape in three different ways:   taper angle,   diameter, and extension.   With these motions, I realized it was possible to make a highly effective gripper with a wide repertoire of potential grasping strategies,   which could allow for a huge range of ingredients to be handled by a single gripper.  The gripper can  either open or close like a hand gathering and grabbing a handful of food, or stab like a fork, push food off of that fork, or dispense loose food items gradually, e.g. ‘sprinkling’.  This gripper went on to become the primary end effector for a $1M+ commercial research project 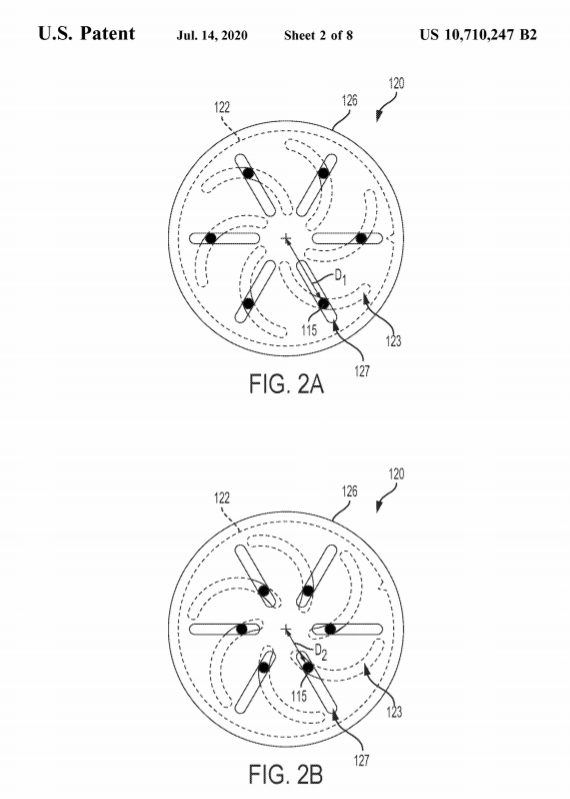 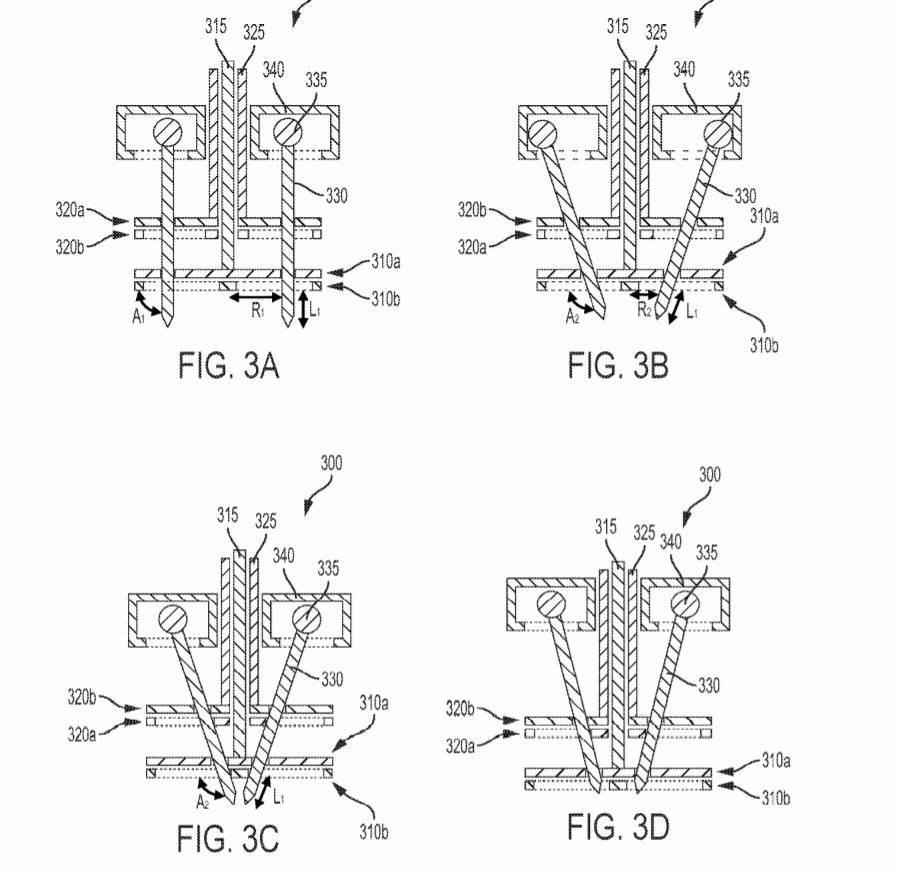 The conical iris gripper was rapid prototyped with 3d printing,  laser cutting,  OEM parts, and a minimum of machining,  over the span of about two weeks with other projects going on. The initial prototype was made using mostly laser cut acrylic and off the shelf parts, with a materials cost of less than $150.

I’m pleased to release a new publication in the Twenty-Second International Conference on Composite Materials (ICCM22) entitled “Enabling Biomimetic Morphing UAVs”  with colleagues at SRI,  the University of Southern California,  and NextGen Aeronautics.

This publication details one application of a technology I have helped develop with my colleague Roy Kornbluh at SRI:  ultra-lightweight,   ultra-low power,    electrolaminate clutches and mechanical multiplexers for reconfigurable systems in aerospace, astronautical, and terrestrial robotic applications.

My role in this project was to mechanically design a demonstrator tailfin assembly using these new lightweight, low power, electrolaminate clutches to lock control surfaces of aerial vehicles into variable area configurations.    I did all the mechanical and electrical design as well as composite fabrication of the carbon fiber tail and rear fuselage assembly.

Abstract:       This paper reports on the design and testing of a practical, morphing wing aircraft. We intentionally mix and match elements of avian inspired design with novel technologies and proven mechanical components to provide a demonstrator aircraft that shows, in the simplest way, what benefits accrue from basic morphing changes. The simplest and most beneficial morphing concept is to change the wing area and aspect ratio, and it is easy to show that, for an otherwise fixed example configuration, a factor of three decrease in wing planform area can sustain a predicted lift:drag ratio, L/D = 9, when the vehicle flight speed U doubles from 12 to 24 m/s. Without morphing, L/D would be 6.5. Such a large area change can be achieved with a telescoping wing, which is not biomimetic, but is practicable and achievable using standard and custom 3D printed components. We combine this variation with a tail-body configuration that is bio-inspired, and suggested by previous and continuing work on the vehicle-level flight efficiency of tailless aircraft, where a standard tail geometry is replaced by a trailing edge flap that converts the cargo-carrying body into a lifting body. The practical shape-changing is enabled by the use of novel electrolaminate materials that can quickly change stiffness at varying positions/postures.

Six years ago,    while hiking rim-to-rim in the Grand Canyon the first time,  I discovered a profoundly spectacular location with interesting acoustics.    A wooden footbridge crossed a chasm,   forming a convenient stage,    with sheer rock walls ascending close together towards the north rim of the canyon,   2000′  overhead.   The Kaibab trail is even, in spots, blasted as a “C” shaped ledge into a sheer-vertical cliff face.  It is the largest and most topographically interesting  space I’ve ever gotten to sing in.

What stood out, to my ears, was the unusual quiet and echo.   It is free of almost any noise,   except the sounds of small ground squirrels or birds traipsing in the underbrush.       But when a sound was made, the echoes were unusually distinct and lively.   Echoes would echo, and echo,  and it seemed you could hear the fourth or fifth reflection of a handclap.    I stopped and whistled  for a few minutes,     and remember thinking to myself,   wistfully:

Six years passed.  A time of incredible growth and flux,    and now I find myself living on the west coast,  theoretically within a day’s drive of this spot.    (13 hours from the San Francisco bay).   The idea is still high among my crowded backlog of adventures / projects / enthusiasms.  And then the news arrives,  that the Perseid meteor shower this year (a regular August occurrence) was expected to be unusually brilliant this year,  “The brightest in a decade” even.        This finally pushed the idea (of revisiting the North Kaibab trail with my Cello) from “A good idea worth doing sometime”  to “A unique opportunity to do now“.    I messaged a few friends to inquire if anyone wanted to go,  and join me in a middle-of-the-night cello recital on a footbridge in the canyon,   beneath the brightest meteor shower of a decade.    Many were interested but could not attend due to prior commitments,  or the extreme driving:hiking ratio (near 2:1).   but the invite met an enthusastic “yes” from a friend who, it turns out,  was more apt a fellow adventurer than I could have known beforehand:  not only a willing impromptu adventurer,  but an aerialist/gymnast/theatrical producer,  with extraordinary insights and ideas about unconventional audience/performer relationships.

I was bicycling by starlight in the middle of the desert at midnight, 20 miles from anywhere in the middle of Goblin Valley Utah,  in late August.   Crossing deserts during the night is necessary when the daytime shade temperature is between 110 and 120F   (but there is no shade) and ground temperatures reach 150F before noon.  But it is also a treasure to ride in the desert at night:   the skies are the clearest of anywhere on the continent.  One day before the August full moon, I was riding by star and moon light alone.  Nobody was on the road. Cars would pass maybe once every half hour or two, and when they did, I could see their headlights ten minutes away, hear their roar minutes away.  I’d been riding this way, solo, for a few hours,   racing towards Moab Utah and Arches NP trying to arrive on my birthday and see the full moon rise over these incredible landscapes,   when I saw a parked car on the side of the road up ahead,  lights off, with it’s trunk open,   and a fellow standing next to it.

I should mention that,  when asking locals about what to expect,  before crossing the 100 miles of open Mojave desert a few weeks back,  from Joshua Tree  to the Colorado river,  multiple independent sources repeated several times “It’s where people go to bury bodies”,  or “Ever seen ‘the Hills have Eyes’?”.

But I saw his camera tripod, and no bodies. I had also benefited previously from a trucker who stopped and shared an ice chest of gatorade with me in the middle of the Mojave desert; here was an opportunity to pay it forward. And I was curious.

He certainly did not expect a jovial Gordon “hello, howdy! Are you okay, need any water?”.      Not when the loudest thing he’d likely experienced for his last hour was the click of his camera shutter,  sand underfoot, and what night creature sounds as occur in August, in the deep sand and sagebrush desert, at midnight. I tried to mitigate his shock by speaking from a respectful safe distance of 50 feet or so.

To say he was “Startled” would be an understatement.  We were in one of the most desolate places in the country, after midnight, in the dark. He’d probably felt himself the only person for miles,  ten seconds prior.  Bicycles riding by starlight are stealthy!  I saw him reassure  himself (discretely) of the location of a bottle of bear-spray on his hip,  his countermeasures.   I had sympathy for this;  I had done similar before hailing him.  We were both assessing each other. And then we talked.

We progressed quickly from threat-assessment  to rapport and shared enthusiasm. Two gearhead adventurers, alone in the middle of the desert at midnight talking under starlight .  We talked for over an hour.  Before I resumed bicycling,   he made me promise to message him before I arrived in Chicago, where he would host me.   He also took this picture of me,  which is one of my favorites of the whole trip:

Lou is a photography buff and documentary filmmaker, his youtube channel is “Bonneville Stories”.   Some of his work is linked below.   His brother held a land – speed record on motorcycles;  He was in town to document the fastest motorcycle in the world, the BuB streamliner motorcycle,   which reaches in excess of 360MPH  / Mach 0.5.    I often think of this encounter as one of the more rewarding “talk to strangers” lessons in good faith optimism… especially since pessimism could easily have prejudiced this introduction to nonexistence. It would have been easy to make an excuse to pass a car in a desolate area.

This story, from six years ago, came to mind in the context of two especially significant meetings this last week and next, discussing character development and education in science, technology, engineering and math with DARPA,  the Navy,   and a large private philanthropy whose director has honored me by asking for my input.  As I refine my thoughts I’m enjoying revisiting a few of these experiences which in retrospect seem like formative decision points or character building moments.    Stay tuned!

It was an honor to be invited to present my work to the distinguished audience of DorkBot SF,  held at Noisebridge, a storied and significant Hacker space in San Fransico.

DorkBot is an international speaker series whose self-summary is “People doing strange things with electricity“.  In this context I presented some of the more interesting robotic, high voltage photography,  and other technical art projects I’ve worked on, especially the recently completed CNC bubble iris. 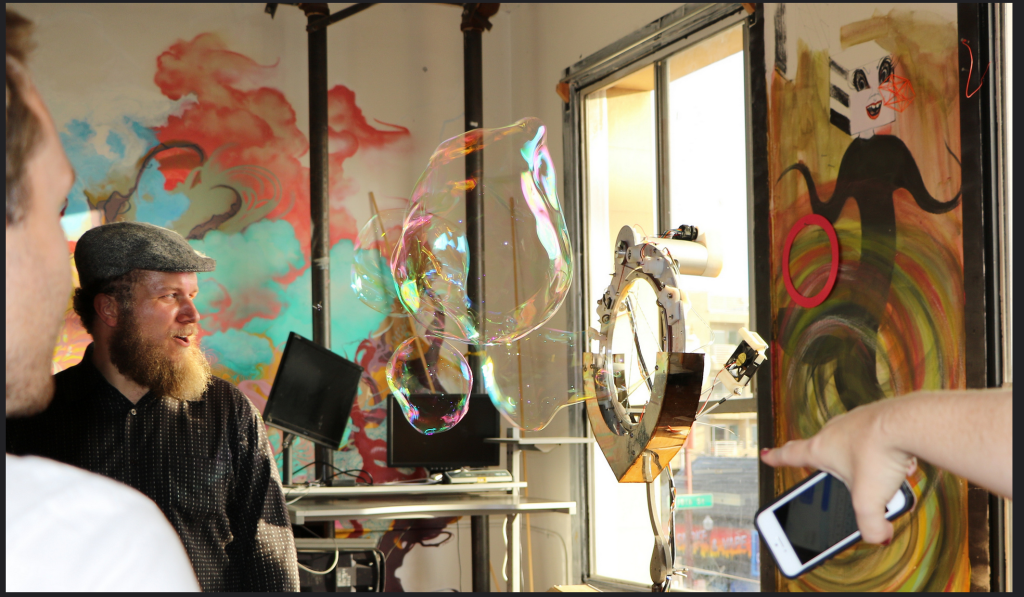 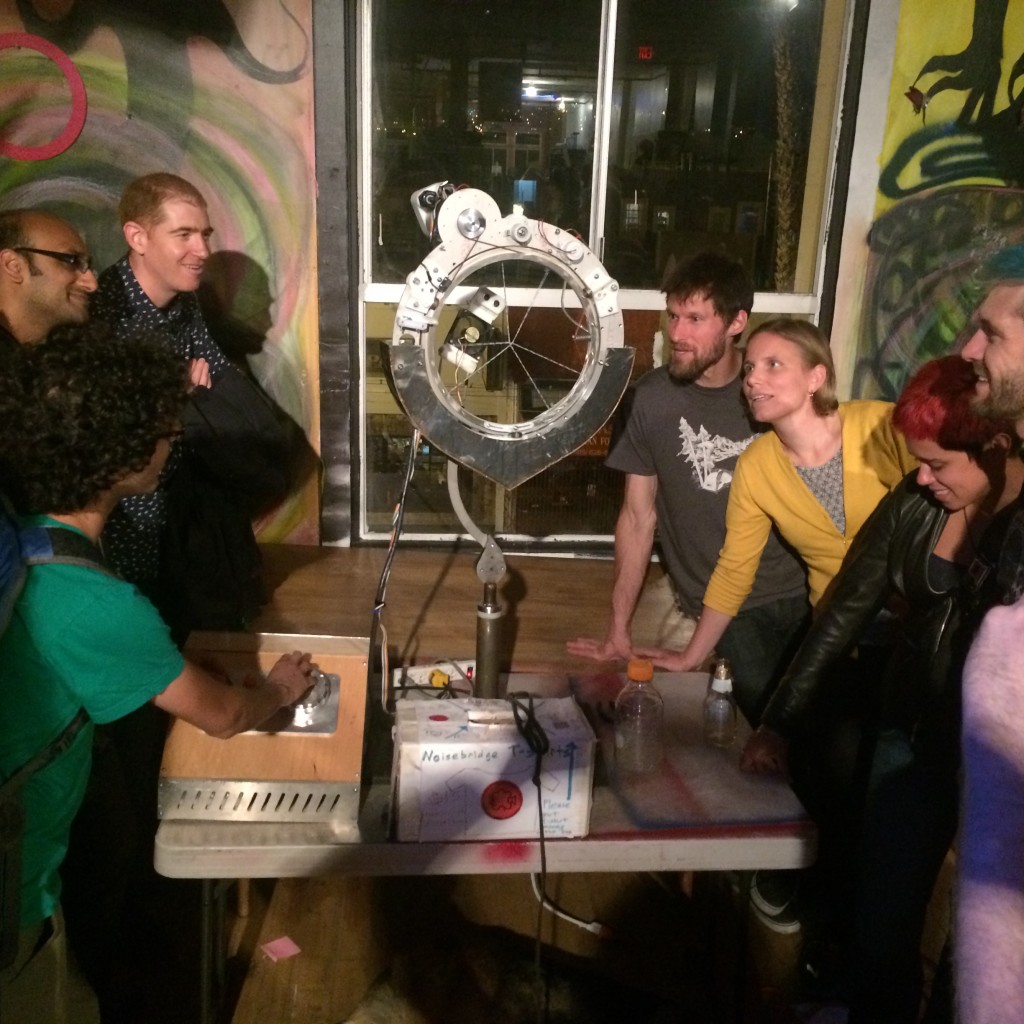 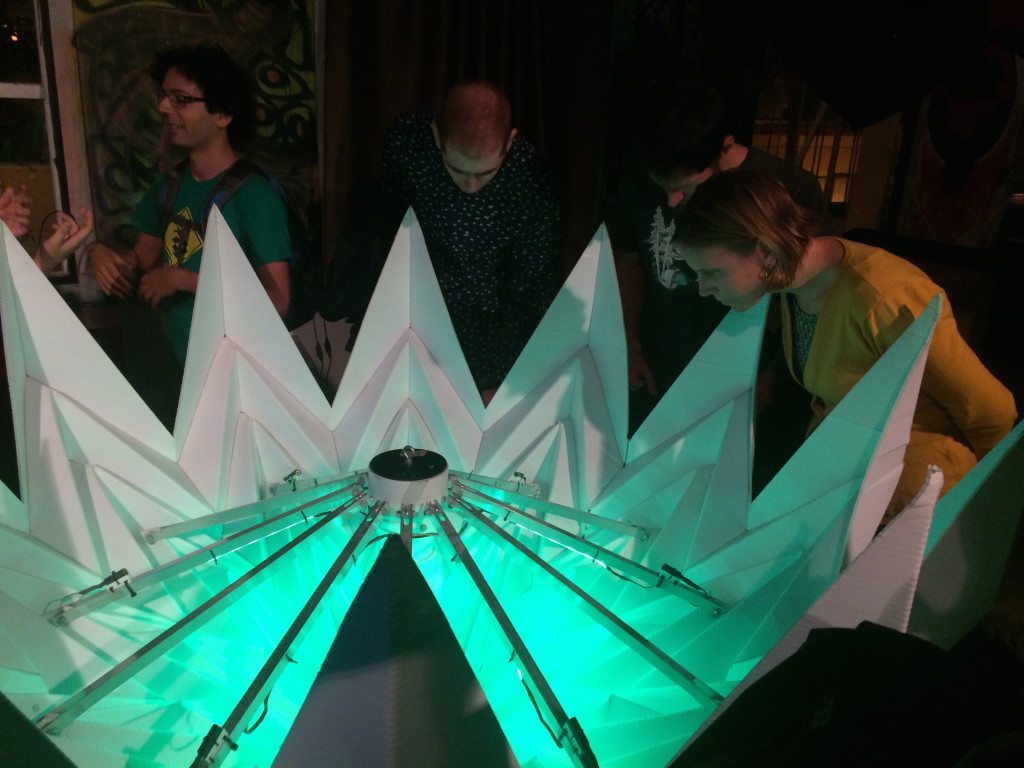 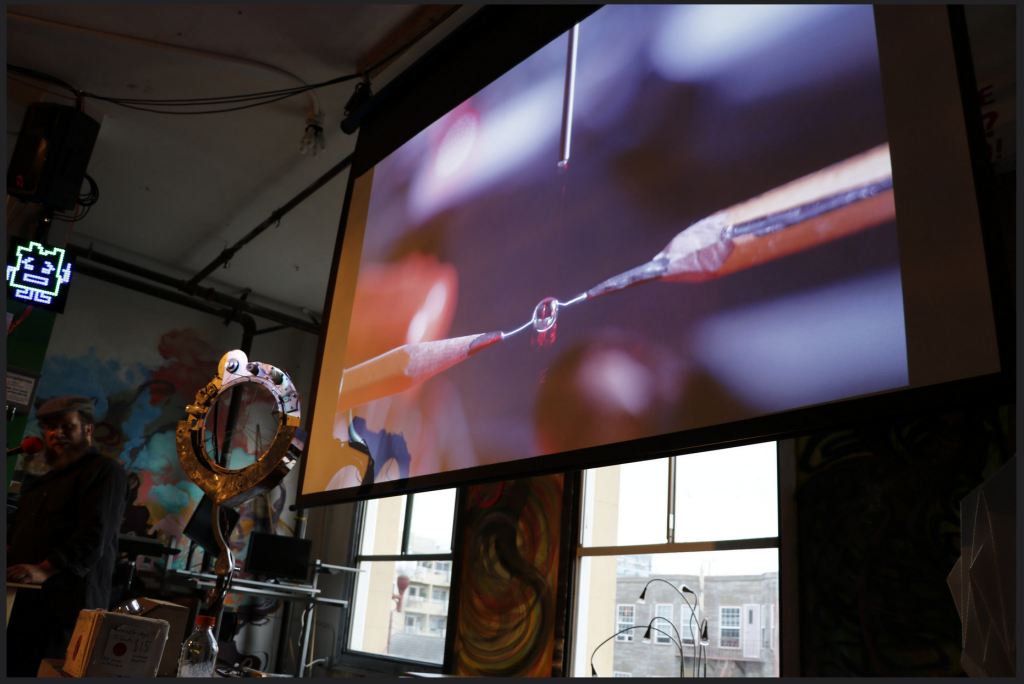 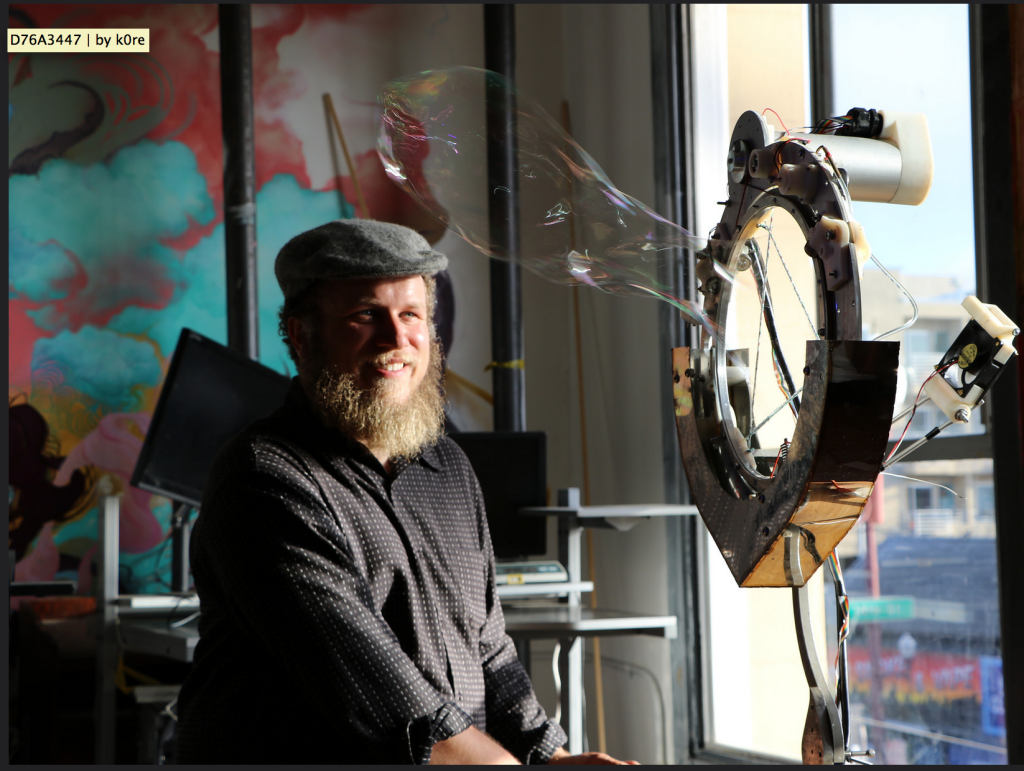 It is a real pleasure to see Make Magazine,  Hackaday, and Adafruit #ArtTuesday all re-blog the publication of the apparatus I’ve built to bring new precision, repeatability, and automation to the craft of giant soap bubble making.  Stay tuned for all the interesting things I’ll use this instrument for!

The Space Frontier Foundation’s annual conference is one of the most important commercial space conferences in the nation, and will be held July 16-18 in Silicon Valley.

Attended by the elite and rising stars of space entrepreneurship and the administrators of NASA, the FAA,  and the founders and directors of significant aerospace companies,  I am inspired and delighted to play to a crowd of rocket scientists at the culmination of such a conference.